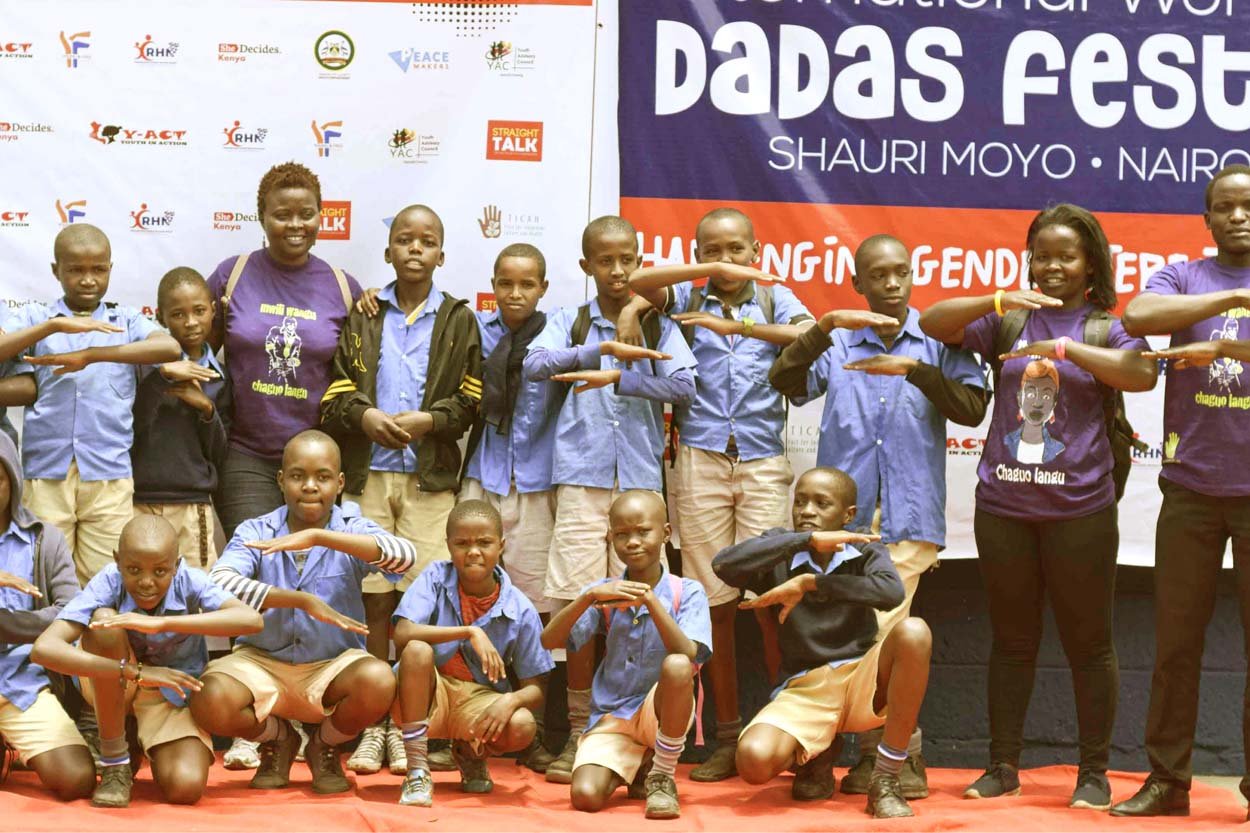 Pomp and Colour at our Inaugural Girls Festival, ‘Dada Fest 2020’

Dadas Fest 2020 was held at Our Lady of Mercy Girls’ Primary School at Shauri Moyo in Nairobi. This special event celebrated International Women Day with a focus on school girls and boys. The fest’s theme, “Challenging gender stereotypes in schools” and its hashtag #TukoSawaNaUsawa was in line with this year’s International Women Day theme, “I am Generation Equality : Realising Women’s Rights.”

“We have raised our children telling them boys or girls should or should not do this or that. For instance, boys should not cry or speak out, girls should sit like this or do this or that chore. It is wrong. We need to teach children that they are equal and what a boy can do, a girl can do it too and probably do it better even and vice versa,” said Ms Christine Marete, the Shauri Moyo Location chief.

Ms Marete said boys have been raised to keep quiet and suffer in silence, adding that this kills their self esteem and makes them keep silent even when they are sexually violated or have this and that issue bothering them.

“Let us aim at raising boys who can speak up for themselves first, then we shall be making progress and be sure we are raising men who can comfortably and confidently speak about equality and women’s rights too,” the chief added.

Samuel Gachiri, a teacher, said gender equality can be achieved in schools if the government, teachers and girls themselves get very deliberate with achieving it.

On the role of parents in encouraging and instilling gender equality from an early age, Catherine Wangui, a parent, said that parents have a very big obligation at home and be champions of no gender stereotypes.

“All children are equal. Parents should completely move from the old belief that it is better to educate a boy than  girl. In the house, as a parent, be very deliberate with assigning house chores, let boys wash utensils, let girl cut grass. Help your children demystify gender roles. Start when they are young, for instance, give a small girl a car toy,” the parent said.

On girls and menstruation, another parent, Jackline Mumbo said that boys must be actively involved.

“ Teach boys what menstruation is. Deliberately send your son to the shop or supermarket to buy his sister a packet of sanitary towels. This boy will grow up knowing that menstruation is normal and will not go to school to shame a menstruating girl and push her to do the unthinkable like the menstruation shaming case we had last year in Bomet County,” Ms Mumbo said.

Teacher Modesta of Kibera Soccer Academy told the girls that they should nof be ashamed of their menses, elaborating that menstruation is something that the girls should be very proud of for it makes them real women.

Speaking on behalf of the students, Biron* a pupil suggests that  boys be actively involved in menstruation sensitization.

“We see girls get segregated to be taught this and that then they come back to class and tell us they have been given ‘bread’ (sanitary pads). As boys we need to learn too and know the basics, that way we shall not shame but help and support them  when it that time of the month,” Biron said.

Away from the talks, the children were engaged in other activities that made the fest a success. These included a lot of fun, games, skits  and entertainment relevant to the theme of the day. Notably too, was a procession that the participants took part in. The walk around Shauri Moyo was sentisitize and educate the local community about International Women Day, gender equality and women rights with the message carried in songs, chants and placards.