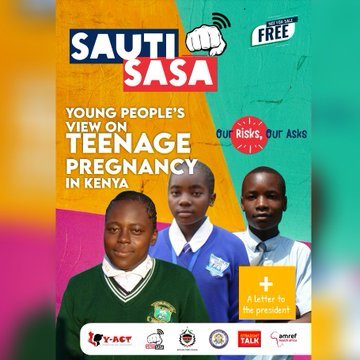 Breaking the silence on teen pregnancies in Kenya

In partnership with Y-ACT/ Amref Health Africa, Mombasa County, National Youth Council and NCPD, Straight Talk Foundation Kenya has today launched Sauti Sasa magazine – a compelling compilation of young people’s voices on teenage Pregnancy in Kenya. The launch which took place in a colorful ceremony to mark the Teen Pregnancy, Defilement, and Mental Health Awareness campaign at Magongo Dispensary in Mombasa County, comes at a time when Mombasa is among the counties with the highest number of teen pregnancies.

Sauti Sasa magazine is a youth-centric publication which is an advocacy tool targeting policy makers, political influencers, Adolescent Sexual Reproductive Health (ASRH) advocates, religious leaders, community leaders and all other relevant Agents of Change (AoC) with adolescents key ASRH concerns and messages with an overall aim to raise adolescents voices among the various key community influencers that have the potential to drive the reduction of teenage pregnancies in the four counties of Nairobi, Kakamega, Bungoma and West Pokot. Straight Talk school clubs and Sauti sasa action groups in the four counties took part in the preparation of the magazine.

While presiding over the launch, Mombasa County Health Services CEC Dr. Godfrey Nato who represented Deputy Governor H.E Dr. William Kingi, said that teenage pregnancy has been a major concern in Mombasa County and that although cases are declining, the greatest achievement would be zero numbers. Dr Nato lauded the publication, saying it would go a long way to amplify adolescents and young people’s voice on teenage pregnancy. Also present at the launch were the Mombasa County Director Public Health Dr. Salma Swaleh, AYC/GBV Coordinator Madam Selina Kithinji, Sauti Sasa Y-Act National and County Coordinator Mbuki Mburu and the Area MCA Bernard Ogutu among others.

Sauti Sasa stories, opinions and lived experiences by the adolescents, seek to build a sound evidence base, help avoid reinventing the wheel each time, and help convincing others of the importance and efficacy of human interest stories as a practical and useful strategy in accelerated progress, along with heightened commitment and a real sense of urgency towards early teenage pregnancies by all stakeholders.

Early teenage pregnancy remains to be one of the major contributors to maternal mortality.

Studies have shown that complications relating to pregnancies and childbirth are the leading cause of death for adolescent and young girls aged 15-19 globally. In reiteration, pregnant teenage girls especially those in schools face myriads of health risks including, school drop outs, mental health issues, life threatening complications during childbirth due to immature bodies, child marriage and dependency which also enables and grooms more risk of sexual and gender based violence and abuse.

A men’s movement in support of Gender-Based Violence awareness was also launched at the event a well as distribution of donations of free masks by the National Youth Council and Molped sanitary towels, while the #COVID19 vaccination was ongoing at the vaccination point for all eligible participants.