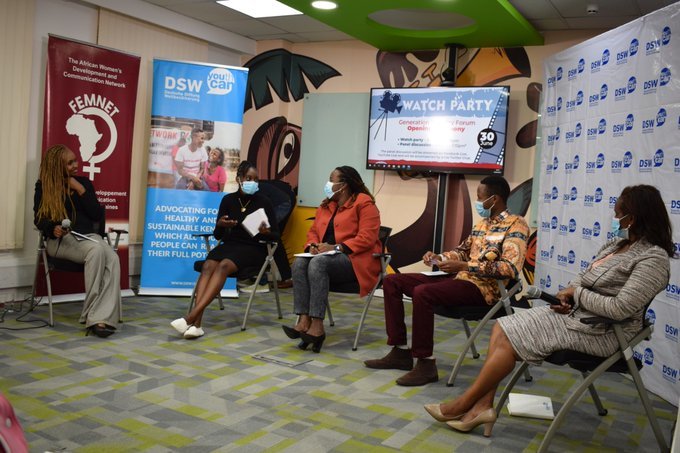 As the much anticipated Generation Equality Forum opening ceremony was taking place in Paris, France, tens of adolescents and young people in Kenya sat pensively as they watched the event beamed live from screens mounted at a city hotel in Nairobi.

Organised in partnership with DSWKenya, Femnet and Better4Kenya, the Generation Equality watch party dubbed #GEFWatchPartyYetu provided an opportunity for many young people in Kenya who were not able to attend GEF sessions to take note of the commitments being made, reflect on the actions that their governments have committed to and make appropriate follow up through their advocacy and policy influencing work.

The highly interactive online event hosted young people in Kenya aged 15-24 years old, who are sexual and reproductive health and family planning youth champions, representatives of civil society organisations as well as public officials. The young people were drawn from the DSW programme areas of Meru, Nakuru, Nyandarua, Laikipia and Nairobi Counties and joined the opening ceremony of the Generation Equality forum virtually at the Ibis Hotel  in Westlands, Nairobi.

Using Facebook and Twitter, the young people were part of discussions of Kenya’s generation equality forum commitments. Through social media action, sexual reproductive health rights champions used these platforms to share their stories and experiences during COVID 19 pandemic. COVID-19 has exposed and accelerated existing gender inequalities and the impact on women and girls has been severe and disproportionate. As we begin to recover from the pandemic, it was noted that we must put gender equality at the heart of that process.

Speaking at the Watch Party, DSW Kenya’s Country Director Evelyn Samba expressed the urgency of gender equality in the world. “Gender inequality is an injustice. It must stop and it must stop right here,” she said. Evelyn observed that the Kenyan constitution is primed as a human rights document, therefore, it’s inalienably a gender equality document.

Mercy Mwende, a youth advocate from Meru, expressed great need for mainstreaming inclusion and equality especially to benefit those living with disabilities. “We need to create facilities and services that are perfectly tailored for women and girls with disabilities,” She said.

Repeating the popular maxim that there is nothing for the youth without the youth, watch party participants accentuated the need for youth inclusion and involvement in programs and policy formulation and implementation for ownership.

“As the youth of this nation, we need to push for meaningful involvement right from designing to implementation of programs meant for us and about us” noted panelist Maurice Muturi. Already, the quest for meaningful youth participation is bearing fruits. “Young people are now sitting in the committees of the health facilities in Nakuru County advocating for youth interests in the provision of services,” shared Maurice.

There were also calls to foster a united front in addressing gender equality issues in Kenya. “Advocates of gender equality are all part of the same camp. Let’s come together and not create silos,” said Sandra Mwarania, of the White Ribbon Alliance Kenya.

Generation Equality is an international platform that seeks to accelerate the implementation of the gender equality commitments in the Beijing Declaration and Platform for Action of 1995 to achieve transformative change. Generation Equality Forum (GEF) is convened by UN Women and co-hosted by the governments of Mexico and France. As part of the GEF process, Kenya is co-leading the Gender-Based Violence (GBV) Action Coalition, one of the GEF’s six Action Coalitions (ACs).

The Forum brings together governments, corporations, NGOs, youth-led groups and Foundations to secure concrete, ambitious, and transformative commitments for gender equality. These are shaped by the Action Coalitions. They are the world’s roadmap for gender equality.

GEF is fueling a powerful and lasting coalition for gender equality. It presents a vital moment for activists, feminists, youth and allies to achieve transformative change for generations to come.